Cinnamon is one of my favourite spices. 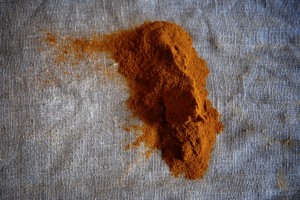 It boosts your metabolism, can help control your blood sugar and protects you from infection as well as smelling and tasting wonderful.

Various studies have shown that it can help those with insulin resistance (so, it’s wonderful for staving off Type 2 Diabetes). Another study has shown Cinnamon Oil to help stop the growth of medication resistant yeast infections like Candida albicans fungus and Escherichia coli bacteria. (So drink cinnamon bark infusion to help your immune system). Cinnamon can help fight stomach bugs, as it has anti-bacterial qualities. It has also been shown by other research to help prevent some cancers and aid IBS control, while some claim it can relieve arthritis symptoms.

It has high levels of manganese which is used to build bones, blood and other connective tissues. This from a study at the University of Maryland Medical Center. Defiencies in manganese can lead to osteoperosis.

Not only a great food preserver, but Cinnamon also neutralises bad odours by killing the bacteria causing them.

Cinnamon has also been claimed to have anti-oxidant powers, helping to reduce the cancer-causing free radicals in our bodies.

Stop a virus or bacterial infection before it takes hold – drink cinnamon tea or infuse a stick of cinnamon in hot water and drink as soon as you feel a tickle in your throat or a runny nose coming on (immediately!). You may well kill the bug before it has a chance to infiltrate your system!

Nutritionally, one teaspoon a day of ground cinnamon contains:

Cinnamon is versatile and while commonly thought of as a spice for sweet dishes, it also complements many savoury dishes.

Try adding a heaped spoonful of cinnamon to a tomato-based sauce or gravy for meatballs for instance. Like in the traditional mince pies, that were a way of preserving meat, cinnamon adds a complex aroma to a savoury dish as well as helping preserve the food by staving off the growth of molds and bad bugs.

Thanks to cinnamonvogue.com for these figures. I have many times read of the positive effects of cinnamon in our diets and homes – I even use cinnamon to infuse water I wash the bathroom with, as cinnamon is very effective at preventing growth of mould and making surfaces smell great!