A recipe from Berkshire, England for “Poor Knights of Windsor” reads like supper for a real man – Brandy and lard drenched pain perdu with lashings of jam, sugar or cinnamon atop.

Banana Bread has the eggs, fruit, cinnamon and butter, on a bread foundation… the same intention, but oven baked not pan fried.

Preheat the oven to 200deg. Grease a large loaf tin liberally with butter or coconut oil.

Mix the eggs on medium speed in your food processor for up to 10 mins, til they are light and fluffy. Add the buttermilk and vinegar.

Combine all the dry ingredients in a bowl. (include the coconut manna if using, but if you’re using coconut cream instead, add that in with the eggs and buttermilk)

Put the soft butter, bananas, vanilla and rice malt syrup in a bowl and mash til it is a delectable chunky mass.

Add the banana mess into the egg bowl and mix just until combined, adding the whey and orange juice now.

Using a wooden spoon, fold in your dry ingredients, adding the pecans last.

Pour the mix into the loaf pan, even out the surface with the wooden spoon, then dot with chunks of butter, sprinkle with the cinnamon and optional sugar (just cause it looks pretty).

Bake in the middle of the oven for 10 minutes, then turn down the heat to 150deg and continue to cook for a further 55 mins.

Turn out of the pan onto a wire rack. once you remove from the oven. obviously.

Slice generously chunkily (double adverb?) and enjoy your Knight’s Supper with lashings of butter. or lard. 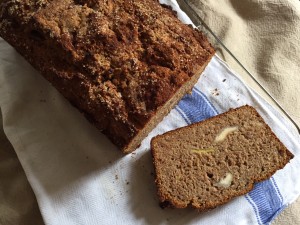