Florence White devotes a few short entries to Marrow Bones. I admit right up front, that bone marrow is my secret pleasure. Osso Bucco is an enduring favourite dish not least for the somewhat messy picking of the bones at the end. After the family has left the table to clear their plates, I may even have been known to secretly slurp the bone to make sure I didn’t miss a drop of its succulent innards.

I asked the butcher for soup bones this morning, planning to make a ragout for this evening, and for the leftovers to be soup for tomorrow night’s dinner. I love bone soups and ragouts. They are so packed with nutrition and flavour.

Bone broth is something that should be partaken of daily. In ‘Burning Bright’, set in 1792, Tracey Chevalier writes about Mrs Pelham drinking her rich, daily morning cup of bone broth instead of tea. In historical times, before modern medicine, immunisation and penicillin were able to save us from many simple ways to die, bone broth would have done an awfully good job of knocking a few bad bugs on the head. It lines the stomach, aids digestion and is actually anti-bacterial. My sources tell me that if you have bone broth daily, you will not catch the gastro bug when it comes your way.

Bones also contain so many minerals – calcium, silicon, sulphur, magnesium, zinc and phosphorus to name but a few.

If you marinate your bones/oxtail in wine or vinegar – or add to your broth while it’s cooking, you’ll be sure to draw all the minerals out of the bone, into your broth and thus into your body.

Instead, the butcher only had some oxtail (thanks very much, oxtail ragout, perfect) and marrow bones. I know just what Florence White and I can do with that.

Marrow does contain 8 calories per gram, but then we only eat a small amount and the fats are the healthiest fats. The nutritional value makes it well worth while – it contains important elements for brain growth and development. Some scientists even put the evolution of the human brain down to human consumption of bone marrow and oily brains. Marrow is rich in protein, lipids, vitamins, complex B, minerals mentioned above and also Lecithin and Methionine.

Anti-inflammatory, antispasmodic and immune-strengthening. Oh, yes, I’m going to say it, Bone Marrow is a superfood.

In 1846, Charles Esmé Francatelli provided Ms White with a couple of Marrow Bone Savoury recipes, one of which was Marrow Toast. He writes

His Timing: Sufficient to make the toast, chop the parsley and cook the marrow for a minute.

Well. Too easy. Here’s my recipe – two in fact.

I had been cooking my oxtail ragout and used that to steam the marrow. 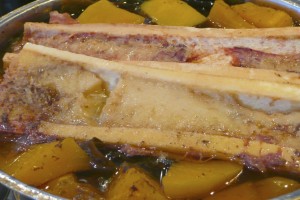 The oxtail and vegetables had been simmering away for a couple of hours and I just sat my marrow bones on top to steam for 5 minutes. (900g oxtail; ½ cup any leftover wine or 2 tbsp wine vinegar; 1 onion cut in half; 1 turnip, peeled and chunky chopped; 2 carrots, peeled and chunky chopped; 3 bay leaves; 1 tbsp butter; 1 tsp cumin ground; 1 tsp coriander seeds ground; 1 tsp black salt; 1 handful of sweet kombu kelp, soaked in water over night; 750ml kombu water in which the sweet kombu soaked overnight) 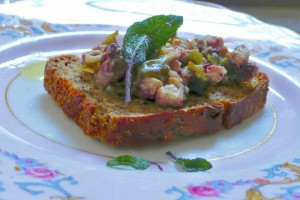 serves 2 (half a marrow bone per person)

Put your kombu and shallot in a pan that is large enough to fit your marrow bones horizontally. Cover the kombu, bay leaf and shallot with enough water to completely submerge (preferably the water you have soaked the kombu in over night), then bring to the boil. Once rolling, cover and reduce to a simmer for 10 minutes.

Place your marrow bones on top, keep covered and steam for five minutes.

Toast your sourdough, so it’s ready and waiting as soon as your marrow is cooked.

Remove the kombu and a smidge of the shallot (to taste) and slice up into tiny squares.

Remove the marrow bones and slide the cooked marrow onto a warm plate. Chop into tiny squares.

Mix the marrow and kombu in a small warm bowl, squeezing lemon juice to taste on top.

Serve it up onto your toast, season with black salt and pepper and enjoy piping hot!

SAGE – To garnish, I heated 1 tbsp of coconut oil in a little pool in the middle of a low-sided frying pan (I used a crepe pan), threw some fresh sage into the hot oil puddle for 5 seconds, picked it out with tongs and served it with my Marrow Toast. It was crispy, brought the depth of the sage aroma to the dish and looked so pretty and green.

If you prefer, you can simply serve the marrow still in its bone, with a small spoon, a lemon wedge and of course, your crispy gluten free sourdough (any crispy toast or cracker will do just fine).

Sign Up here for more recipes – including some secret ones! 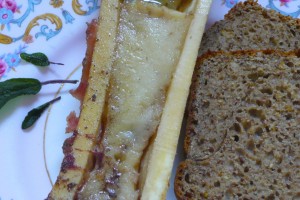 Steamed Marrow; served in a bone bowl, on bone china.