With both my children completely absorbed in the  Fedup.com.au FAILSAFE Elimination Diet, the challenge was to come up with a receipt from Good Things in England that would be a wonderful birthday treat for my dad (not such a sweet tooth) – and also edible as a treat for my highly-food-restricted children!

It has been a wonderful, warm few weeks settling in to Australia. I could lament the difficulties of travelling a family across the globe and managing two cross-continental schools and homes, or I could admit we have been doing a lot of this. 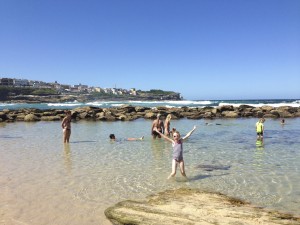 With lots of swimming on the menu, but not many foods, a quick recipe is a good recipe. The children are allowed cashews (unroasted), eggs and peeled pears. No other fruit or nuts allowed. No gluten, no dairy. Let’s go.

Tubi’s Bon Vivant from The Woollahra Kitchen was the other half of the inspiration for this layered, nutty pav-esque delight. 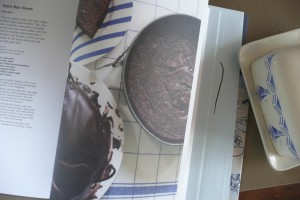 Florence White warns that the Almond Puffs are soft and break easily, so it’s a good plan to place a sheet of rice paper (which can be eaten!) on the tin and bake her puffs on that – they can be lifted out on the rice paper which can be cut out and broken away around them.

How simple, elegant, textural and tasty. I wish I had rice paper, as it would have been the perfect base for this cake – much better than the baking paper I used.

I wasn’t brave enough to try rice malt syrup instead of castor sugar for the puff – let me know if you’ve tried this, as I would rather not use refined sugars at all…

Layer One – The Cashew Puff

Put the cake tin in the fridge until ready to use.

Add the sugar slowly, while continuing to whip.

Once shiny and firm, fold in the ground cashews. 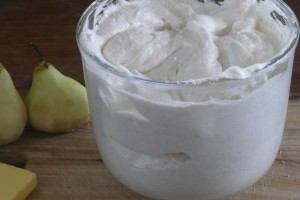 Egg whites, ground cashews and sugar. As light as a cloud on a Sydney summer day.

Place in the cake tin and smooth down the top. Cook for 20 mins. 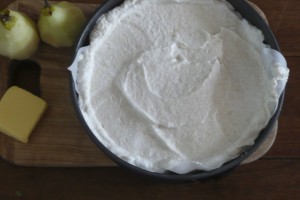 While this is cooking, prepare the next layer.

Melt the butter then add the rice malt syrup, blitzed pears and cashew butter in a pan on medium heat.

Split the vanilla pod, scrape in the seeds, drop in the pod and stir.

Allow the mix to boil for up to a minute.

Stir in the optional A2 cream and remove from the heat.

(I added this A2 cream as a bit of a challenge to my dairy-free children, to see how it would affect them. My son in particular can tell from a tummy ache very quickly if there’s traditional cow’s dairy in something…)

Whisk the egg yolks separately, then stir them into the cooling mix. 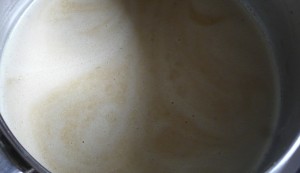 When the Layer One Puff comes out of the oven… 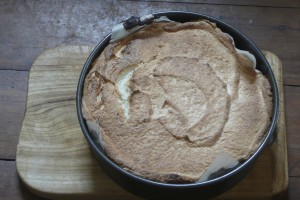 …pour the custard on top and return to the oven for a further 20 mins.

Remove from the oven when set. It may seem wobbly but will firm up as it cools. Cool at room temperature.

Keep it in the fridge til ready  to eat – best eaten on the same day.

Cashew and Vanilla Pear Puff. A not-too-sweet birthday delight for all the family.

FAILSAFE NOTE: Thanks to some feedback from Sue Dengate’s Failsafe Facebook Group – for those on the Failsafe diet, 12 cashews are allowed per day, with children allowed only half that. This cake contains about 180 cashews, so it would be about 18 serves for adults on the FAILSAFE Elimination Diet, or half-size serves for children doing Elimination. Alternatively, leave out half or all the cashews – it will be more like a pavlova than a torte, but still delicious. (Thanks Ingrid!) 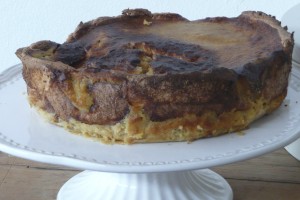