Jam is an essential part of the English food tradition. Without it, what can we possibly put on our toast, wiggs or gluten free muffins and scones?

Good Things In England has a few things to say about Pears.

While my children are trying the FAILSAFE diet to help their mood and behaviour (to GREAT success so far), we’re making jars and jars of Pear Jam, Pear being the only fruit they can eat.

I’ll delve further into Florence White’s alternative recipes another day soon. I have a couple of others I’ve gathered from ancient books in the British Library also. Including one for preserving pears that seems to take days, involve at least three cooking periods and more than double the weight of the pears in sugar, by the end of it all. I won’t worry about sharing that one, especially as I’m not sure one could even taste the pears anymore, with all that sugar! It must have been just for the very wealthy…or a Christmas treat alongside the Sugar Mice.

Elodie proudly wrapped a Christmas present early in December, placed it under the Christmas tree with my name on it. I wasn’t sure what it was, labelled FRAGILE.  Christmas morning, this is what I found within. 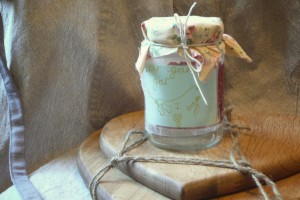 A new batch of Pir Gam was officially ordered.

Here’s what Elodie and I did.

In order to make FAILSAFE jam, we can’t use peel or citrus. I use as little sugar as possible, which is why I add the agar agar, to help the jam to set. Sugar is part of the preserving process of the jam, however, as we get through a jar a week, and I only make 3 jars at a time, we don’t need to worry too much. In this day and age, we can buy pears all year round.

I used the Friendly Food Cookbook and the Fedup cook book in first making Pear Jam, so this recipe is based on theirs. 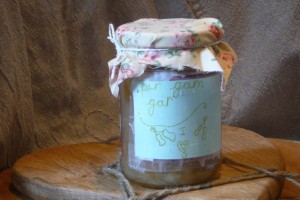