My grandma’s Plum Pudding was always the highlight of our Christmas. When I was just a girl who didn’t even like Christmas Pudding, seeing the Christmas pudding bowl come out, accompanied by its Brandy Butter, epitomised the yuletide spirit and the convivial sense of family. 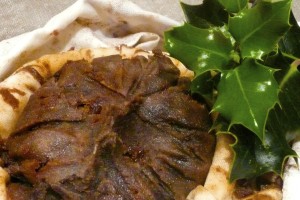 I happily took the bowl of pudding and vanilla ice cream that was handed to me and sat down at the table with the 12 or so other family members.

Our paper crowns were still in place on our heads, the table was decorated with holly leaves, gum leaves, flowering eucalypts, stars and various crocheted items; the aroma of fresh brewed coffee hung in the warm, summer air… it was festive and happy.

I used my spoon to dig through the plum pudding to see if I were lucky enough to find one of grandma’s historic thrupenny bits (threepence). My grandma had held onto these silver coins for decades. Unlike the copper penny coins, the silver would not foul the flavour of the pudding. Regardless of how much I had already eaten and how much I disliked plum pudding, there was no way I was going to miss out on the ice cream and the promise of finding treasure.

One day when I was in my twenties, soon after I had finally begun to like olives (yes, late starter I know), I decided to actually try the plum pudding. To my delight, I loved it.

But as the role of pudding maker had traditionally fallen to grandma, then to my mum, I haven’t made it before.

My contribution to Christmas has frequently been the gluten free Buche De Noel – or Christmas Log. A rolled sponge made with hazelnut meal, filled, in our case, with creamy sheep’s yoghurt and apricot jam and decorated to look like a log, fallen in the forest, using Chocolate Ganache cream and a buttery Chocolate icing.

Mum had kept intricate, fairy-sized little Swiss decorations for the Buche from our Swiss White Christmas’ in the 1980s and 90s. Bright little red, spotted mushrooms, a woodcutter’s axe, snow-covered holly sprigs and delicate little snowflakes. It’s a complicated, time-consuming cake, but the result so perfectly inspires the imagination, regales the eyes and tempts the palate, that its worth the hours that it takes. And with practise, it becomes second nature.

So it’s time to start rehearsing my first Christmas Puddings.

Florence White has furnished me with more recipes than I know what to do with.

Well, that is not entirely true. I know just what to do with them and I am going to have the best time trying them out over the coming weeks. You can share the results and experiment with me.

This lazy Sunday, after so many weeks of adventuring behind us (Scotland, Cumbria, Gloucestershire), we stayed in. My husband cooked our roast chook and I put my first pudding on the boil.

I chose Sir Charles’ Rowley’s for two reasons. Unlike many of the recipes, it doesn’t suggest leaving the mix overnight before the first boil – important today, as dessert is only a few hours away. Further, it seemed to be just the right size for my small pudding bowl. Several of the recipes to follow in the weeks ahead, you’ll see, are truly extended-family size recipes. Especially Charles Esme Francatelli’s – the very Plum Pudding recipe that graced the Royal Christmas Feast in Queen Victoria’s day. 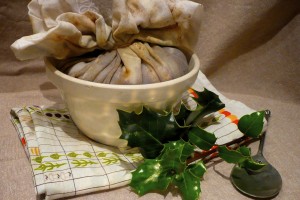 He simply combines the dry ingredients, cuts the suet ‘very large’, beats the eggs well, then uses them to bind the rest of the ingredients in a big bowl, to a very pasty consistency. He uses a cloth wrung out of hot water and floured, then ‘boils as directed’. But in fact there are no boiling directions, aside from a timing ‘5 hours’.

Cooking Time: 2.5 hours, for two small puddings (or 4 hours for one larger)

You can keep the pudding til Christmas, or if you want to test them, like I did, you can eat one now!

On Christmas day, boil the pudding for an hour before serving.

Serve with my Honey Brandy Butter! If you can find a good dairy free ice cream (there are many now made with creamed cashews and coconut cream which are delicious), they would be a good match for your plate too.

How was it? It was delicious. It was not crumbly and held its shape when cut.

The almond meal will have helped it maintain a moistness, while the teff flour provided a good bind. The crumb was a little on the dry side, which may be on account of the choice of teff flour or perhaps I cooked it a little long given the smaller size (I had cooked for 3 hours plus). It wasn’t too dry to diminish the enjoyment of the flavours and texture, as you can tell from the photo below. 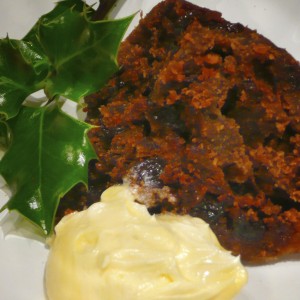 I have some wonderful recipes coming for wine sauce, prune sauce and Brandy Butter of course!

And let me know what you think below. I love reading your comments!