This week’s recipe uses green peas. I came up with this unusual, mind-bending, gluten and dairy free dish in a roundabout way. Definitely thanks to Florence White, but not directly from her book. 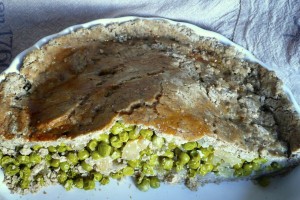 In researching her source for many vegetable dishes at the British Library, Adam’s Luxury and Eve’s Cookery from 1744, I happened upon this unique little gem in the Peas section. 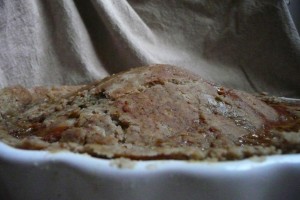 I haven’t heard of a green peas pie before – certainly not as a potentially sweet ingredient – but as an Australian, and therefore a fan of Asian cookery, I love sweets that use legumes, beans and yam flours, so I thought I’d segue from Florence White and turn these peas into something sweeter.

I’ve really had to wing it, as the recipe was bare.

Here’s what I had to work with.

Boil Them. Drain Them. Season them with salt, saffron, butter and sugar; then fill your tart, close it, bake it and when done, pour in some verjuice, ice it, throw on sugar and serve it. “Adam’s Luxury and Eve’s Cookery”

I know one can find Verjuice – Maggie Beer does it in bottles in Australia. It’s hard to find 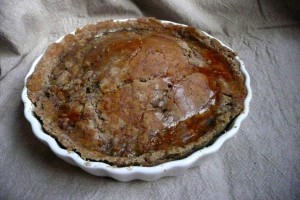 this kind of condiment without added sulfites – and not having access to Maggie Beer’s from here in London, I don’t have the option anyway. (I’m not implying hers contains sulfites! Given her reputation for freshness and excellence, I’m sure it probably doesn’t.)

As I’m moving the children back to Australia for a school term… in one week… I’m also trying to clean out the cupboards. I don’t like waste. So I’m going to make this tart using only what I have readily available. No purchasing of new ingredients to get left in the larder!

According to the glossary of A Proper New Book of Cockerye (1609, edited by Catherine Frere in the 1920s), Verjuice is a green juice made from crab apples, a little like this:

Leave the crabs in a heap. Remove stalks, blacks and rottenelles, then in long troughs with beetles for the purpose, crushe and break them all to mash. Make a bag of coarse hair cloth and press through into a clean vessel. Turn into sweet hogsheads and add a dozen handfuls of damaske roses to each. “A Proper New Book of Cockerye, 1609”

Some of that sounds delightful (the damaske roses for instance – they also provided a recipe for a damask rose marzipan – brightly pink in colour – which I’ll try another time). Other parts of that recipe require further research before I’m able to decipher it fully. Hogsheads? Beetles? Coarse Hair? horse hair? Are they interchangeable? I’ll come back to you.

So what am I to do. There’s an apple in my fruit bowl. I’ll be happy to use it up.

The Pastry is the next dilemma. 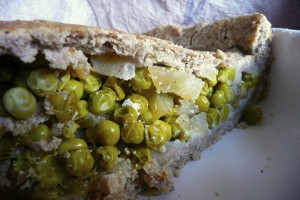 a strong, firm, crisp pastry – hard to achieve without gluten!

No clarification as to which style of pastry to use. As the instructions say to fill with a jelly/juice AFTER cooking and then ‘ice’ before serving, it is clear this is to be a pie best eaten cold, as in the fashion of a Pork Pie.

So I used a recipe from Florence White “To Raise A Piecrust”, provided by a Mr. Fred Wright of Melton Mowbray, 1927.

Of course, as soon as I started, I realised that a ‘raised piecrust’ requires long kneading to develop the gluten.

The purpose of a raised piecrust was to build a vessel within which to cook the meat.

If a pie were cooked in a stiff piecrust – you know those really handsome looking pies you see models of when you visit old castle kitchens? – the eater didn’t eat the pastry! They used a spoon to eat the meaty contents.

It was important for the piecrust to be thick and strong enough to sit in the oven, full of meaty stew, on a stone, but not in a dish. This also meant the pastry browned all over nicely.

Mine is gluten free and I want to eat it, so for these reasons, I did things a little differently. Here’s what I did. 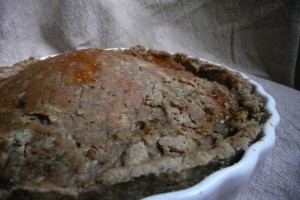 Ingredients For the Pie Filling

Ingredients For the Jelly Filling

Ingredients For the Pastry

Getting the pie into the oven.

As a side at dinner – make it as is and serve with pear chutney, as an entree or side to your main.

As a Vegetarian main course – use a little less sugar if you prefer.

As a main course or a Picnic Pie – If you want to make it more distinctly savoury – omit sugar and make a thick savoury gelee to pour in at the end of the cooking time, using chicken stock and some richly gelatinous bones, instead of the apple jelly.

OK. There you have it. A pie that can be dessert, main or picnic. This definitely feels a bit loopy. What do you think? Would you make it? It didn’t take that long! I’m taking it to a friend’s house tonight. I will photograph a slice for you  once it’s chilled and cut; and we’ll give you the verdict. 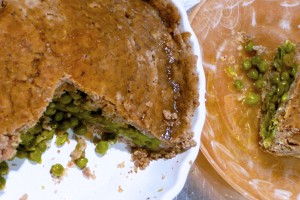 We served it as dessert with Lemon Sorbet.

The hardest thing was getting our heads around peas as dessert! One of my friends kept expecting the apple pieces to taste like onion. Quite a delightful mind bend.

If you plan to make this as a dessert, and don’t want such a mind bend factor, you could use this Chickpea Pastry instead and do it as an open tart.