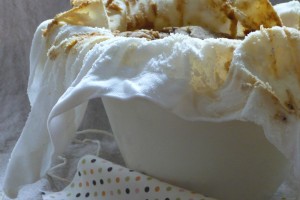 What Christmas Pudding delights have we in store?

I’ve swapped the Suet for sweetly nourishing Coconut Oil, whose benefits include “antimicrobial properties; absorption directly for quick energy; and contribution to the health of the immune system.” according to my diet and nutrition heroines Dr. Mary Enig PhD and Sally Fallon. Sally Fallon’s cookbook Nourishing Traditions has been one of my cookery bibles for more than a decade, not least for its information about nutrition, enzymes and crucial historical food prep methodology.

I wanted to make a pudding that my vegetarian sister in law will be able to eat on Christmas Day, despite my own love of beef dripping – the suet not only steeping the pudding in long held tradition and being so nourishingly vitamin-rich, but lending a hearty flavour and slight savoury edge to the sweetness of the fruity pudding. 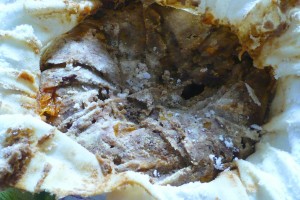 The flavours are enhanced the longer the cooked pudding is kept.

Coconut Oil is my favourite fat for all cooking, so it’s a happy swap for me. It’s aroma is subtle but unique, its flavour a little on the sweet side, its texture meltingly perfect. If you scoop a little of the solid, white fat onto your finger, within a few seconds, it will melt into a runny liquid that you must quickly lick off, to the delight of your tastebuds and your body. Putting a small teaspoon of coconut oil in your mouth is as great a treat as a piece of chocolate.

My brother in law, also coming for Christmas, is Balinese. He is a master in the kitchen – I dream of the flavours of his Indonesian and Balinese dishes! He often cooks with coconut oil, having been brought up with it.

Coconut Oil seemed to be doubly the right oil for this pudding.

Thinking about Nyoman, it struck me that instead of raisins, currants or prunes, I could stay in the tropics. Organic dried mango and pineapple then – and ginger! Another favourite nourishing ingredient. 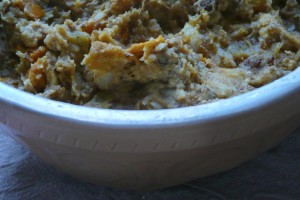 Tropical Fruits and Coconut Oil for the Christmas Pudding Mix

Also some coconut flour, though not too much, as it’s a very dense flour that will solidify into a concrete mass under all that boiling I’m sure! It soaks up huge amounts of water, so expands in cooking, but also, as a result, gets heavy and won’t give the lightness a boiled pudding needs.

I chose Lord Barrington’s recipe as it was for fewer people…and I was low on eggs. So many pudding recipes, designed to feed a Christmas hoard, contain a dozen eggs! I don’t need to cook for that many people, and chances are, neither do you. But in case you do, know that these puddings will work if you simply multiply all the other ingredients proportionately with the extra number of eggs you wish to add. You can estimate a ratio of 1 egg to every 2 people.

I was surprised to read recently that Christmas Pudding first appeared on English yuletide tables in the 18th Century. In fact King George 1st is often credited with first requesting a Plum Pudding as a part of the Christmas Feast. King George’s Christmas Pudding features in Good Things In England.  It’s ingredients include: 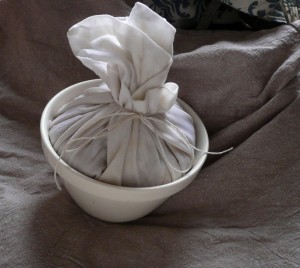 Rather than going in a pudding cloth, this mix, after sitting for 12 hours, goes into buttered moulds which are covered in buttered paper, which is then tied down with a cloth and then boiled. For a long time.

Before King George 1st made Sweet Puddings fashionable, a Plum Pudding was in fact a way of preserving meat.

According to a site that no longer seems accessible, called Icons of England, because of shortages in fodder, surplus livestock were historically slaughtered at the end of the season. The meat was slow cooked in huge cauldrons, with dried fruit to preserve it – then stored in pastry cases as Mince Pies. There you go, mince pies were actually a combination of savoury meat with dried fruit. They didn’t add sugar!

Originating in Roman Times, Plum Pottage was a similar slow cooked combination of meat, vegetables and dried fruit for preserving (in fact, ‘plums’ were the name given to currants!).

It was around the era of King George that treacle or molasses was added to the meat and currants, with eggs and suet to bind. The alcohol content would also help preserve the luxury ingredients for many months. Being a luxury, a harvest or Christmas table was the perfect time to share it. 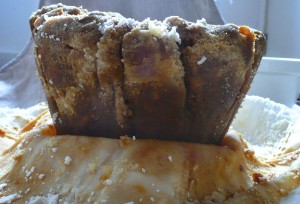 Unwrapping the pudding before turning to serve…

based upon the receipt from ‘1860, sent by the Lady Margaret Campbell, Vice-President of the English Folk Cookery Association.’ Good Things In England

Cooking Time: 4 hours to boil, then a month to steep before re-boiling 1 hour to serve. 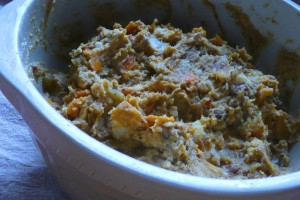 After adding the tropical fruits and coconut oil, set the pudding mix to steep for 24 hours

Did you know, each member of the family should stir the pudding and make a wish?

For more tips and secrets, Sign Up for my (rare) emails here! 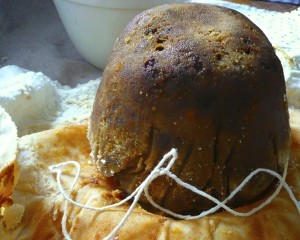 Dishy Tropical Christmas Pudding. Just add holly. Or a red hibiscus if you have to hand.

Please do let me know what you think of the recipe by commenting below! I’m sitting alone in my Hoxton home and love to hear your thoughts!